Mookaite is a form of Jasper that is only found in the Kenney Ranges of Western Australia, near the Mooka Creek, from which it gets its name. “Mooka” is the Australian Aboriginal word for running waters. The Mookaite, which is also called Australian Jasper, showcases an array of earthy reds, ochre, purple, burgundy, cream, brown, and gray; it is a perfect representation of the Australian Outback. This gorgeous stone was formed about 125 million years ago when microscopic sea creatures called radiolaria fossilized.

There are many legends and superstitions surrounding Jasper and Mookaite Jasper. The Mesopotamians believed that the god, Marduk (Jupiter) formed three heavens above Earth. The lowest one was formed from Jasper and he drew the constellations on it. The Vikings and Germans have legends that Siegried, the dragon slayer, had a magical sword with a hilt that was inlaid with Jasper to give him courage. 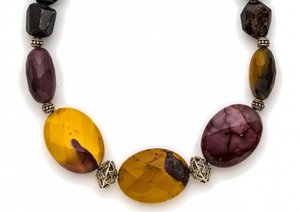 The Australian Aborigines believed that Mookaite Jasper was a stone of Mother Earth and that it had deep earth energies. Because of this, it was used as a healing stone for bestowing strength and vitality. In addition, the Australian Aboriginal people have been using Mookaites as a healing stone since before explorers discovered the continent. Throughout history, Jasper amulets were believed to protect the wearer against phantasms, evil spirits, and witchcraft.

Jennifer Reeves is highly skilled at creating magnificent masterpieces from Australian Jasper. To bring out your grace and beauty with this gem, explore our Mookaite jewelry, like “Impressive with a WOW Factor!” Contact Jennifer Reeves Designs today with any questions.