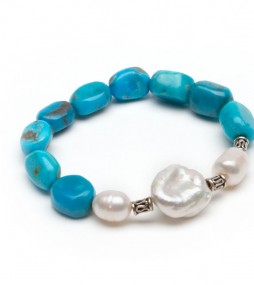 Turquoise is perhaps the oldest stone in history and was once the talisman of kings, shamans and warriors. It is a symbol of wisdom, nobility and the power of immortality. Among Ancient Egyptians, Persians, Chinese, Aztecs, Incans and other Native Americans, it was sacred and a sign of power, luck and protection.

The name Turquoise is derived from the French, pierre turquoise, meaning “Turkish stone.” This name was coined because ancient trade routes mapped their routes through Turkey, where Venetian merchants often bought the stone.

Turquoise beads were found in Iraq as far back as 5000 B.C. IN 3200 B.C. Egyptians were mining the stones in the Sinai. Even the death mask of King Tut was studded with Turquoise, as well as many ancient artifacts found in the tomb of Moctezuma, the last leader of the Aztecs. For nearly a thousand years, Native Americans have mined and fashioned turquoise into beautiful handmade jewelry. To the ancient Indian, Turquoise on the body always symbolized the god of the sky alive in the earth.

Jennifer Reeves often uses the beautiful azure color of Turquoise to accent her exquisite handmade jewelry. If you need help choosing the right piece for you, feel free to call us at 708-717-5942.