The Tiger’s Eye, also known as the Tiger Eye, is a gemstone that has been revered since ancient times. The Tiger’s Eye is a variety of Quartz that is known for its chatoyancy, or having a band of bright reflected light, and layers of rich brown and gold colors. Tiger’s Eye gems mostly come from India, the United States, South Africa, and Australia. 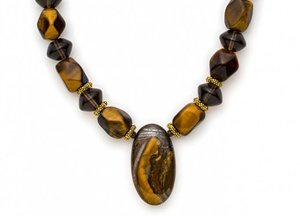 In ancient Egypt, Tiger’s Eyes were used for the eyes of their deity statues to represent divine vision. Egyptians believed that these gems provided the protection of both the sun and the earth gods (Ra and Geb). In ancient Rome, soldiers carried Tiger’s Eyes into battle because they believed the stones had the power to deflect weapons and to grant bravery in battle. They used the Eye of the Tiger in the thrill of the fight, helping them rise up to the challenge of their rivals.

Jennifer Reeves’ Tiger’s Eye jewelry, like “Beautiful & Versatile” embodies the elegant, mysterious qualities of these gems and enhances these qualities in the wearer. We welcome you to browse Jennifer Reeves Designs and to call us at 708-717-5942 with any inquiries.