Coral forms in the sea from small marine invertebrate animals, such as polyp. The remains of these animals gather together and build up over thousands of years, thus forming Coral reefs, colonies, or islands. Coral varies in color, from bright to dark red, orange-red, pink, blue, black, and white. Red Coral is the most sought-after form of color. The deeper the red, the more valuable the Coral.

Coral has been used in jewelry for thousands of years. The oldest Red Coral jewelry we know of was used by the Mesopotamians in about 3000 B.C. Many other cultures have also prized Coral for use in jewelry and other decorative objects since ancient times.

In ancient times, Coral was known as the “Sea’s Garden” or the “Garden of the Sea” because people thought that Coral was a plant. In ancient Greece, it was believed that when Perseus beheaded Medusa, some of her blood dripped into the sea, forming Red Coral. Other ancient myths believed that Mars was made from Coral, because of its color. 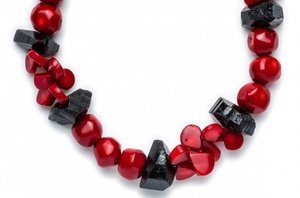 Ancient Roman children wore Coral necklaces as a protection against danger and the evil eye. Roman women wore Coral fertility charms. Other cultures believed that Coral can protect against magic and cure madness. In the 16th century, many believed that a piece of red or white Coral could calm a raging tempest.

Jennifer Reeves is proud to create stunning Red Coral jewelry, like “Let’s Party.” We encourage you to explore our jewelry collection and to contact Jennifer Reeves Designs with any queries.