Peridot is a light green to olive-green gemstone that has been adored and treasured since ancient times. The name Peridot come from the French word “peritot,” which means gold, because Peridots sometimes vary towards this color. Peridots are very radiant. They keep their shining color even at night, so they are sometimes called “The Evening Emerald.”

As early as 1500 BC, Peridots were mined from Topazo Island, which is now called Zabargad or St. John’s Island, in the Egyptian Red Sea. This island was the ancient world’s main source of Peridot. The inhabitants of the island were forced to collect the luminescent gems for the Egyptian Pharaoh’s treasury. Legend says that the miners would actually locate the gems at night because of their radiance. They would mark the spot and then come back to mine the gem the following day. As ancient Egypt controlled the supply of Peridot, it comes as no surprise that the Peridot is the national gem of Egypt. Ancient Egyptians referred to Peridots as “The Gem of the Sun.” 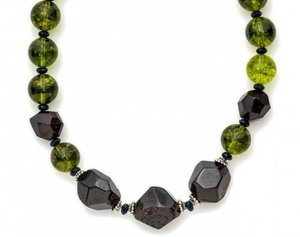 Peridot is formed as the earth’s magma slowly cools to form igneous rock. In addition to being born of Earth’s fire, Peridot also comes to Earth from outer space on occasion. Peridot is the only gem that can be found in meteorites that is sometimes large enough to make jewelry from. Although the world’s ancient source of Peridot has been depleted, Peridot can be found in Burma, China, Afghanistan, Pakistan, Vietnam, Ethiopia, Arizona, and on occasion, Hawaii.

Jennifer enjoys creating wearable masterpieces from Peridot, including “Far Away Forest Find.” We invite you to explore our Evening Emerald jewelry, as well as the rest of our Vibrant Gemstone collection. Feel free to contact Jennifer Reeves Designs at 708-717-5942 with any queries.