Agates include the numerous varieties of banded Chalcedony, which is a mineral in the Quartz family. Agates can have banded layers, stripes, “eye” markings, or specks of color. These gemstones can form in nearly every color that the earth can produce, so they are sometimes referred to as “the earth rainbow.” The Agate stone received its name from the Archetes River in Sicily, Italy, where the stone was first found in 3rd or 4th century BC.

Agate gems have been used in jewelry since Biblical Babylonian times. Much later, these gemstones sparked a world-renowned stonecutting and polishing industry in Germany. The industry flourished from the 15th to the 19th century and still exists today.

There are many legends and beliefs surrounding Agate gemstones. In ancient times in Rome, the Agate was treasured for its reputed medicinal and talismanic properties. The Romans believed that if an Agate was powdered and mixed with water, it could counteract serpents’ venom. Agates were once believed to enable the wearer to vanquish earthly obstacles, including high winds and lightning. Ancient seafarers used Agate amulets, as they believed they would protect them from the dangers of the surging ocean. 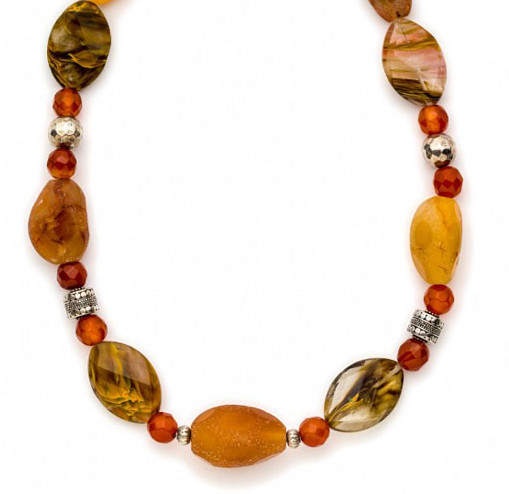 In ancient cultures, Agates were believed to make the wearer agreeable and persuasive as well as endowing them with courage and strength. Agates jewelry was also believed to protect the wearer from dangers. Specifically, Agate talismans were thought to protect children from harm and from falling.

Jennifer Reeves encourages you to browse her website and to see our gorgeous Agate jewelry, like “A Bright Versatile Piece for all Seasons,” for yourself. We invite you to call us at 708-717-5942 with any comments or queries.