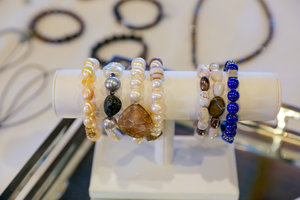 Jennifer Reeves incorporates Freshwater Pearls in her jewelry collections because they showcase style, taste, and sophistication. These beauties are also associated with grace and wisdom. Freshwater Pears develop into a variety of colors, including pastels, dark purples, light pinks, and classic white. Some Freshwater Pearls develop with a metallic appearance, which gives Jennifer creative flexibility in the color palette of her designs.

There are many superstitions and myths surrounding Pearls. The ancient Greeks believed that Aphrodite’s tears of joy hardened and became Pearls. Other cultures also believed that Pearls formed from tears. In Japanese folktales, Pearls were formed from the tears of mythical creatures like mermaids and nymphs. Some cultures called Pearls “teardrops of the moon.” In Hindu folklore, dewdrops fell from the moon into the sea, forming Pearls. In ancient Chinese culture, it was believed that dragons carried Pearls between their teeth. The dragon must be slain to claim the Pearls, which symbolized wisdom.

Precious Pearls have been prized and treasured for centuries. The oldest known piece of Pearl jewelry was discovered in a Persian Princess’s sarcophagus from 520 B.C. In ancient times, Egyptians were often buried with their Pearls. During the Byzantine Empire, the law stated that only the emperor was allowed to wear Precious Pearls.

At Jennifer Reeves Designs, we are thrilled to offer flawless, delicate, and distinct waterborne wonders. Incorporate accents of color and class that are as timeless as they are beautiful with Jennifer’s Freshwater Pearls.