Ametrine gemstones are a combination of Amethyst and Citrine. The two separate crystals, with their individual colors, are intergrown to form a pattern of purple and yellow. The words Amethyst and Citrine were combined to form the name Ametrine. This lovely gem is also known as Amethyst-Citrine, Trystine, Bicolor Amethyst, Bicolor Quartz, and Bolivianite (or Bolivinita). The last name is used by the locals in Bolivia, where the Ametrine is the national gem.

Ametrine gems were first found in Rio Grande do Sul, Brazil. Despite this, the Anahi Mine in Bolivia currently produces all commercial Ametrine. These mines were said to have been discovered by the native Indians in the seventeenth century. Other (noncommercial) deposits of Ametrine have been found in the United States, Canada, India, and Mozambique. 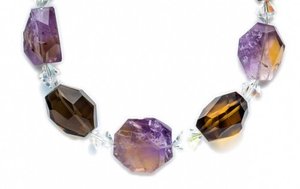 According to legend, Princess Anahi of the Ayoreo tribe fell in love with and married Felipe de Urriola y Goitia, a Spanish soldier. Her father, the chief, gave them a mine that produced two beautifully colored gems as a dowry. When Don Felipe decided to return to Spain, Anahi decided to go with him, though she was torn because of her love for her tribe. The princess’ tribe was angry and plotted to kill Don Felipe. Anahi warned her husband and his men but was injured. She saw her husband one last time and placed a gem from the mine in his hands, saying it represented her eternal love for him. The two colors of the Ametrine gem represented her heart torn between her husband and her tribe. The Anahi Mine in Bolivia was named after this brave princess.

Jennifer Reeves enjoys creating masterpieces from this beautiful, two-toned gemstone. If you would like to enhance your natural beauty with this magnificent gem, explore our Ametrine jewelry, including “Take My Breath Away.” We invite you to contact us at 708-717-5942 with any inquiries.