Onyx is a black stone ribboned with white stripes that has been highly prized, revered, and even feared since ancient times. The word Onyx comes from the Latin and Greek words that mean “claw” or “fingernail.” This is because of the resemblance of the stone to the human nail. In Arabic, the word for Onyx also means “sadness.”

In Roman legend, the goddess Venus was resting on the banks of the Indus River and fell asleep. Cupid came and trimmed her nails with the point of his arrow. The clippings fell into the river and changed into Onyx. In other legends, the Onyx was considered a “Gem of Saturn.”

Onyx had lots of uses in ancient times. They were highly praised for use in ceremonies and burials and as amulets for swords, armor, and shields to protect and strengthen warriors in battle. Some cultures used the Onyx and its red and white counterpart, the Sardonyx, to carve figures of heroes and gods in cameo engravings. These stones were also used to make stamps, seals, stone inlays, tiles, and handles. 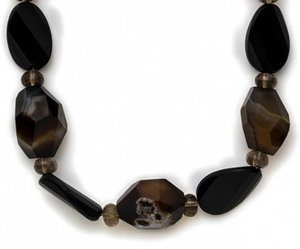 In some cultures, the Onyx was treasured and revered while in others, they were feared. Some believed the Onyx to be a bad luck stone that could cause sadness, anger, and mood swings. Onyx was thought to separate lovers, cause family discord, and bring nightmares. In these cultures, the way to counteract the effects of the Onyx was to wear the Sardonyx, or Sard stone. On the other hand, Persians believed that Onyx offered protection from the evil eye. Placing an Onyx on the stomach of a woman in labor was believed to reduce pain and quicken delivery. The Onyx was also believed to be a cure for epilepsy. The Romans believed the Onyx to be a protective stone. Entering battle with amulets of Onyx or Sardonyx engraved with Mars (the god of war) or Hercules would bestow courage.

Feel free to browse our revered jewelry, including our Onyx necklace, “Sassy & Mysterious.” Contact Jennifer Reeves Designs with any inquiries.