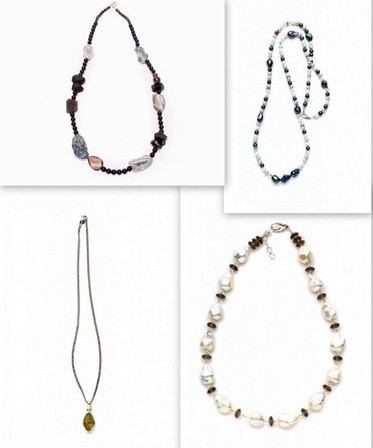 Gemstones are universally admired and used in jewelry. Some of the most popular gems are birthstones. There is a birthstone associated with each month of the year. It is believed that birthstones date back to the breastplate of Aaron that contained twelve gemstones representing the twelve tribes of Israel. The current list of birthstones was made in 1912. Only one change has been made since then: Tanzanite was added to December.

Each birthstone has a meaning and significance associated with it. Many even have superstitions attached.

January – The Garnet comes in a variety of colors. This gem is considered a great gift of friendship and trust. Superstition says that the Garnet will keep the wearer safe during travel.

February – The Amethyst comes in a range of stunning purple shades. In ancient Greece, it was believed that Amethysts protected the wearer from drunkenness and allowed them to keep a balanced mindset. The Amethyst is said to strengthen relationships and give the wearer courage. Once, only royalty was allowed to wear this gem.

March – The Aquamarine comes in mesmerizing color ranges of blue that are reminiscent of the sea. Sailors once believed that Aquamarine talismans etched with the image of the sea god, Neptune, would protect them from all ocean dangers. The Aquamarine gem was once thought to cure heart, liver, and stomach diseases. This birthstone has long been a symbol of youth, health, and hope.

April – The Diamond is most commonly white, but can be found in other colors, like yellow, pink, and blue. the Diamond is a symbol of everlasting love, so it is the perfect gift for a loved one. The Diamond was once thought to bring courage.

May – The Emerald is rich green in color. This gem is a symbol of rebirth, fertility, and love. The Romans dedicated the Emerald to Venus, the goddess of love and beauty. Today, Emeralds signify wisdom, growth, and patience.

June – The Pearl and the Alexandrite are June’s birthstones. The Pearl is a symbol of purity. The Ancient Greeks legend, Pearls were the hardened tears of joy from Aphrodite, the goddess of love. The Alexandrite changes colors based on the lighting. This gem symbolizes prosperity and longevity. The Alexandrite is thought to balance the mind and emotions, pacify the soul, and promote spiritual growth.

July – The Ruby is rich red in color. This gem represents love, health, and wisdom. The Ruby is believed to bestow good fortune on its owner and protect them from evil.

September – The Sapphire is most popular in its deep, rich blue color. However, it comes in a variety of colors, including pink, yellow, and green. In the Middle Ages, the Sapphire was believed to protect those close to you from harm. The Sapphire was also thought to guard against evil and poisoning. It symbolizes loyalty, trust, purity, and wisdom.

October – The Tourmaline and the Opal are October’s birthstones. Tourmaline comes in a rainbow of colors and Opals are unique in that each gem is adorned with a one-of-a-kind color combination. In India, the Tourmaline was used as a tool to bring insight and assistance in the discovery of that which is good. The Opal symbolizes faithfulness and confidence. Opal necklaces were worn to repel evil and to protect eyesight.

November – The Topaz and the Citrine are November’s birthstones. The Citrine is warm, yellowish orange. It is believed to be a gift from the sun and to be a healing gem. Topaz is popular in rich orange, but is also found in colors like blue, pink, and yellow. The Topaz symbolizes love and affection. The wearer is believed to have increased strength and intellect.

December – December has three birthstones: Zircon, Tanzanite, and Turquoise. These stones each have magnificent blue tones. Zircon is believed to aid in resting. It is also thought to bring prosperity and promote honor and wisdom in the wearer. The Tanzanite is thought to help the wearer with spiritual awareness and psychic awareness. The Turquoise is considered a love charm. It symbolizes good fortune and success. This gem is thought to relax the mind and protect the wearer from harm.