Garnets come in many colors, but the most common color of Garnet is dark red. The word “garnet” comes from “Garanatus,” a Latin word that means seedlike, in reference to a pomegranate. Small Garnets look like the red seeds found inside a pomegranate. This durable gemstone has been used in jewelry as far back as the Bronze Age. Long ago, in Bohemia (part of modern-day Czechoslovakia), Garnet was plentiful. Cutting, polishing, and mounting Garnets was a rich industry and Bohemian castles and churches were richly decorated with the gem. In the Victorian time period, Garnets were very popular. Much of the jewelry from that era mimics the pomegranate that it was named for, with clusters of tiny gems forming a larger piece. 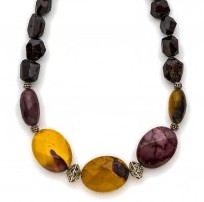 Many legends and superstitions surround the Garnet. In ancient times, the Egyptians thought that the Garnet was the symbol of life. The Greeks believed that Garnets could protect children from drowning and protect against poisons. According to legend, Garnets light up at night and protect their owners from nightmares. In other legends, Noah used a glowing Garnet to light up the ark. The Garnet is symbolic of a quick return and of separated love because Hades is said to have given Persephone a pomegranate before her departure to ensure her speedy return. Garnets were also believed to protect travelers from accidents.