Amber stones are ancient, as they are the fossilized form of tree resin. These gems formed about 50 million years ago. Amber often fossilized with an animal or piece of plant inside, usually mosquitoes or other insects. These gems, which are usually orange, yellow, or brown, have their leading source just west of Kaliningrad, Russia. Amber can also appear white, pale lemon-yellow, and nearly black. The rarer colors of Amber include blue, green, and red. Amber stones are often found washed up on shore, so it has been referred to as “Gold of the Sea.”

There are many legends about Amber stones. In ancient times, Amber was a symbol of nostalgia, loneliness, and grief, so many of its creation stories reference tears. Baltic Amber was thought to originate from the queen of the sea’s palace made of amber at the bottom of the Baltic Sea. This palace was destroyed by her father’s lightning and pieces of Amber can still be found washed up on shore. In Greek mythology, when Phaeton died, his sisters wept so much that they became poplar trees. Their tears congealed and became droplets of Amber. 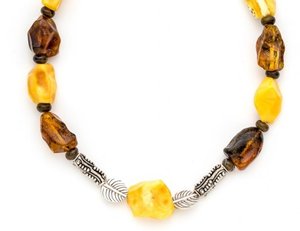 In addition to tears, Amber has been referred to as drops of the sun, hardened honey, solidified sunlight, among other things. In the ancient world, many believed that Amber was honey from the mountains that was formed by the heat of the sun. Others believed Amber to be brilliant droplets of the setting sun over the ocean, where it was congealed and cast ashore. Many people considered Amber as a living being, and in the Far East, it was believed that the souls of tigers turned into Amber at their death. They believed the wearing Amber brought courage to the wearer.

Jennifer Reeves enjoys creating wearable works of art from these warm gems. We invite you to explore our Amber jewelry, like A Little Bit of Southwest, Beautiful and Rare. Contact us with any queries.